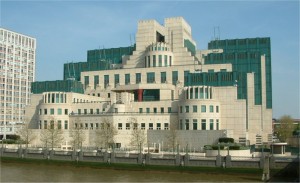 The SIS building, also known as the MI6 building is located at 85 Albert Embankment, London on the bank of the River Thames next to Vauxhall bridge. It features in three of the Pierce Brosnan era bond films: Goldeneye, The World is Not Enough and Die Another Day as the headquarters of MI6 where characters such as James Bond, M, Q and Miss Moneypenny are based.

In the Daniel Craig era, the building appears in Skyfall and Spectre.